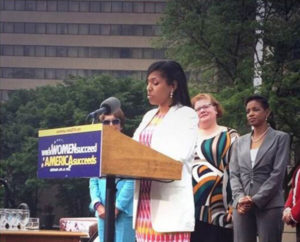 “Remember to honor your growth as much as you honor your beginnings.” – Marti Ridley

I recently presented a training at the United Way Central Ohio on Parlimentary Procedure. At that session, I ran into a friend and colleague Marti Ridley. Marti has been a member of the policy council and long-time volunteer in her Head Start program, the Child Development Council of Franklin County Head Start (CDCFC). Prior to the session, I asked Marti Ridley how Head Start has impacted her life and her children’s lives.

She send me a great powerpoint titled “Gardening with Marti: A Testimony of Parent Leadership,” which she has used in presentations about Head Start before. You can download the full presentation here.

For Marti, the Early Head Start program in Franklin County became a lifeline when she moved from North Carolina to Ohio while expecting her first child.  She writes that the staff were immediately welcoming, patient, kind and supportive.  In these first few years, she said she learned a lot from the program and gained parenting skills and techniques.

After her second child, she was invited to attend a parent meeting and eventually ran for (and won) an elected position on the Policy Council. Through her position on Policy Council, she was opened to additional leadership opportunities throughout the Head Start network, including speaking, training, and advocacy at the local, state, and national level.

Marti writes that she has been a volunteer for Head Start for longer than she’s been employed. Her efforts have not gone unrecognized. She received multiple awards from the CDCFC, including the 2012 Parent Volunteer of the Year and the 2013 Parent of the Year.

Now that her children are old enough to be in school, Marti continues to stay involved as a member of the Board for her local program.

It’s involved parents such as Marti that continue to make Head Start one of the most successful early childhood education programs ever developed. The Gravely Group would like to congratulate Marti and her family on all their success.