Dr. Zigler, the “Father of Head Start,” and a Sliding Fee Scale 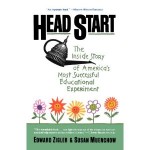 A few months ago in my blog post “Integration and Multiculturalism within Your Head Start Classroom,” I hoped to open a can of worms on the topic of socioeconomic integration in the classroom. However, I was disappointed with the lack of response. While many Head Start programs advocate for multiculturalism, even going so far as to identify it in their mission statements, socioeconomic integration seems to have fewer champions.

However, after re-reading Dr. Edward Zigler’s book, “Head Start: The Inside Story of America’s Most Successful Education Experiment,” I remember that this issue has some people who are very interested in it. Important people, at that.

Dr. Edward Zigler, often considered the “Father of Head Start” and one of the recent recipients of the White House’s “Champions of Change” recognition, has been advocating for socioeconomic integration within the Head Start program for decades. As early as 1970, just five years into the program, Dr. Zigler began to express his frustration on the arbitrary family income limit set in Washington. He told the Washington Post that both middle-class and lower-class children would grow from interaction with each other, and as a self-described “ex-lower-class-child,” he “rather resented the implication that they would not.”

Dr. Zigler admits that it is sometimes a difficult position to take. Early on, many Head Start advocates denounced him as a “reverse Robin Hood,” fearful that the presence of middle-income families would overpower poor families. But Dr. Zigler stands behind countless research that shows children benefit greatly from interaction with children from other socioeconomic classes. Particularly in areas such as tolerance, understanding, and creativity.

Since inception, current federal guidelines have allowed for 10% of the Head Start families to be above the federal poverty level. But Dr. Zigler argues this provision has become more symbolic than practical. Data shows that only about 5% of children’s families are above federal poverty level. And most of those children are either physically or mentally handicapped. (Just so we’re all on the same page, in 2012, the federal poverty line is $23,050 for a family of four.) Dr. Zigler stresses that the strict guidelines of the Head Start program leave out millions of families who would benefit greatly from access to the whole child philosophy. As you can imagine, a family of four with an income slightly over the threshold can still be quite poor and lack access to many basic services.

Dr. Zigler advocates for a sliding fee scale based on the family’s income. Families with higher incomes would pay higher fees for access to the program. But as a life-long researcher into early childhood education, Dr. Zigler is also cautious. He doesn’t think we should just jump right in. He recommends first researching the sliding fee scale in pilot programs to test its effectiveness before mass implementation.

As always, I would love to hear your thoughts below about socioeconomic integration and the possibility of a sliding fee scale below.