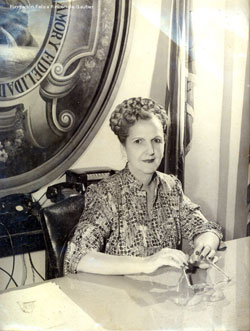 Felisa Rincón de Gautier is most well-known for her tenure as mayor of San Juan, Puerto Rico in the 1940-60s. She was elected in 1946, which at the time made her the first woman to be elected mayor of a capital city in North America.

Throughout her life, Rincón de Gautier championed many causes, particularly for women and the poor. Early on in her life, she played an important role in the women’s suffrage movement. And as mayor, she lead a variety of public projects designed to spur economic development that was inclusive of the poor.

A prime example of her commitment to women and the poor was “Las Escuelas Maternales” program – loosely translated as nursery schools. In the 1950s, she established these Escuelas Maternales centers throughout the city, fulfilling a critical need of poor families, particularly poor women, for quality childcare and early education for their young children.

These centers were more than just day care, they were educationally-focused. At the time, formalized pre-school education served in this way was very rare. The Escuelas Maternales would eventually become the model for the original Head Start program about a decade later.

Rincón de Gautier served for 22 years as the mayor of San Juan, Puerto Rico, and was a major part in shaping what the city is today. As professionals of Head Start, it is important to understand the history of Head Start, as well as recognize the leaders who came before us. Without them, Head Start, one of the longest running anti-poverty programs in the U.S., may not have come to be.