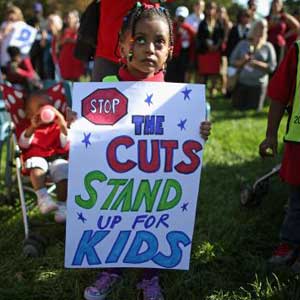 Many Head Start programs across the country will run out of money on the first of November if the government shutdown continues. Although a deal seemingly looms closer to reopen the government, the temporary nature of the proposals from both houses of Congress assure another fight over the federal budget this coming winter, putting many programs like Head Start in limbo again.

If private citizens hadn’t stepped in, many programs would have been shuttered October 1st, the day that Head Start programs in six states were expecting to receive their grant funding. Luckily, a Texas billionaire couple personally loaned $10 million to reopen the Head Start programs. Unfortunately if the shutdown continues through the end of October, Head Start programs in 41 states won’t be able to count on philanthropic billionaires to come to their rescue and will be forced to close.

In response, the National Head Start Association has begun a letter writing campaign to send letters to Congress urging them to end the shutdown.

With the disastrous effects of sequestration, the constant limbo of federal budget fights, and the new dynamic of recompetition, I’m sure many programs are asking, what’s next for Head Start?

We want to hear from you! Has the shutdown affected you? What do you think about it? Leave your comments below…