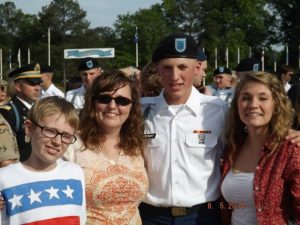 We recently launched a new section on our website called “Share Your Head Start Story.” As part of The Gravely Group’s long-term mission to support Head Start throughout the country, we are gathering some of the inspiring stories of people who attended Head Start since it’s beginning in 1965. These stories will be used as part of our training foundation to continue encouraging families, educators and funders to see first hand through real life scenarios what a significant difference head start programming has and can do for our children.

Our first story was submitted by Melody Hedden from North Carolina:

When my parents signed me up for Head Start in 1979 I am sure they weren’t aware of the impact it would have on my life. Head start is the foundation from which my life skills were built. Born into a family stricken with poverty wasn’t easy. I was the daughter of a farmer who battled with alcoholism and his wife that took on jobs to help ends meet. I didn’t realize how poor we were until my adult years. I thought it was normal for your power to be turned off now and then, add water to the ketchup to make it last until we could afford to buy more and live in a small section of the house in winter months. As hard as those years were I wouldn’t change anything.

Getting signed up for Head start was largely due to my Aunt Pat, who was my favorite aunt and my own personal super hero. You see, my aunt was the director of our community’s local Head Start. Boy did I give her a run for her money. I can recall on several occasions convincing the bus driver that my Aunt Pat said I had better be dropped off at her house. After getting in trouble a few times I decided that wasn’t the best way to get to her house.

Head Start became my security blanket. I was in a class with several other children my age many of whom I would later go to school with. When I think back to those years I remember Mrs. Ollie coming to my house. I didn’t realize she did home visits with all the kids in her class I always thought she came to my house because I was her favorite. I remember playing on the playground with all of my friends and the wonderful homemade meals they would feed us. One incident I remember in particular is Ms. Ollie talked my dad into volunteering at the center. I wasn’t sure how she did that as my dad was a very shy man! He came to the center dressed as Santa Clause. Everyone sat in his lap told him what they wanted and he gave them a book. While I sat patiently waiting on my turn to speak with Santa and rehearsing my list in my mind I couldn’t help but to be caught up in something familiar about him. When it was my turn I sat in his lap not paying to much attention as it was important that he knew I wanted a Betsy Wettsie for Christmas. After I finished my plea for the doll I said, “this aint Santa, this is my daddy, I know because he has cow poop on his boots” Mrs. Ollie rushed me off his lap and brought on the next child. I learned so much in those few years.

I would go many years not thinking about Head Start. In those years I would be struck by several tragic events including the suicide of my father. I felt my life was spinning out of control for some time. I eventually graduated high school and married my high school sweet heart. We began to have children and I stayed home with them for the first couple of years. I began to think back at my own childhood and the experiences I had. I then signed my own children up for Head Start. I volunteered in their classrooms accompanying field trips and doing activities at home with them. I was pregnant with my third child and accepted into the pregnant mom’s program. I began to realize how important my future was because my children’s future largely depended on my future.

While my children were in Head Start they received services that would later change their lives as well. My oldest who was shy and unsure of himself is now an infantryman in the US Army. My daughter who was in the speech program is now going to college in pursuit of a career working with children in poverty. My youngest was referred for lots of testing by Head Start and while in the program we learned that he needed glasses, tubes and had a brain tumor. He is now in the eighth grade and attends a lot of the Head Start activities with me. Their time in the program was priceless.

No one had to sell me on Head Start being the best start. I started thinking of a career with Head Start and applied for a Family Advocate position and was hired in June of 1999. I can recall telling a coworker, “I can see myself retiring from a job like this”. After she got done laughing and assured me that I could find better ways to make a living, I just smiled and knew inside this is where I was meant to be. Head Start paid for me to take classes as I worked. I earned my Associate’s degree in Human Services as well as obtained the Family Service Credential from Duke University. I was promoted to ERSEA Specialist in December of 2000. This year I moved my family from North Carolina to accept a position with Head Start’s Tri-Valley Opportunity Council as Family and Community Services Manager.

As you can see I never quite let go of that security blanket I call Head Start. It is my mission to foster life changing events in the lives of children and families that I work with. I would like to ask you to join my mission and share your Head Start experience with others. Together we can cover more ground of recruiting children into their local Head Start programs.