Lady Bird Johnson’s Involvement in the Creation of Head Start 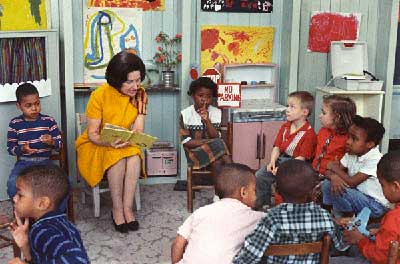 There’s a famous photo of First Lady Johnson reading to a class of Head Start students in Washington DC. When the photo was taken in 1966, the Head Start program was barely a year old. An important part of President Johnson’s series of legislative efforts known as the War on Poverty, Head Start was designed specifically to serve the country’s most vulnerable population – children in poverty.

In the 60s, Lady Bird Johnson redefined what it meant to be a First Lady. She was the first to set up her own formal office in the White House and employ her own press secretary. She interacted directly with Congress and traveled the United States campaigning for the President’s causes, without his accompaniment. She was certainly a force to be reckoned with.

From the beginning, Lady Bird Johnson felt strongly connected to the Head Start program. After a meeting she and President Johnson had with the original planning committee for Head Start, she wrote in her diary, “The Head Start idea has such hope and challenge… Maybe I could help focus public attention in a favorable way on some aspects of Lyndon’s poverty program.”

After that, the First Lady took on the role as a strong public voice for Head Start. When it was time to announce the program, Lady Bird Johnson hosted a well-attended reception at the White House, which included politicians, researchers, and actors alike.

“I have great hopes that this program will be the breakthrough we have been seeking in education,” she said to attendees. Her early call for Head Start volunteers and the publicity gained from the event led to nearly 200,000 people signing up to volunteer across the country.

For more information about First Lady Johnson’s role in the creation of Head Start, take a look at the video below.