The Head Start Program: Its History and Purpose

Did you know that the Head Start program has been around for nearly 50 years? The program was triggered by President Lyndon Johnson’s “War on Poverty” speech, delivered in 1964 to bring awareness to the plight of families living in poverty. He and Sargent Shriver put together a panel of experts, including psychologists and pediatricians, to create a program to help local communities meet the needs of the children of these families living in poverty. From that, Project Head Start was born.

Head Start was launched in 1965 as an 8-week summer school program for children of low-income families. Because it was determined that poverty was an obstacle to success in school, children from lower income families would get a “head start” when they entered public school for the first time. Child development experts suggested that early intervention programs could significantly impact the academic success of children who lived in poverty; thereby breaking the cycle of poverty. 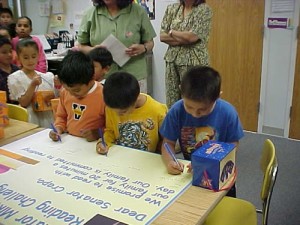 Head Start was designed to meet the social, psychological, emotional, health and nutritional needs of the children. Staffed by volunteers, it initially served more than half a million children across the country. It eventually grew to become a 9-month, half-day program.

Changes to the Head Start program

Many changes ensued in the later years. Some highlights:

Today Head Start serves urban and rural families and children in 50 states, Puerto Rico, the District of Columbia, and the U.S. territories.

What questions can I answer for you about the Head Start program? Post your questions below!