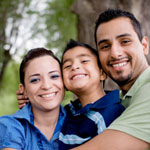 The third leg in our tripod of “The Secret to Head Start Success” is Parent Involvement. Early in the evolution of Head Start, parent participation was identified as a secret to the success of the program. And it still is.

The secret is empowering parents, which can lead to increased parent involvement. As another way Head Start is different from pre-kindergarten, this is also another reason fostering a team environment is so important. Parents are part of your Head Start team.

We work to develop the whole child, which includes their family and community environment and — as you know — this work cannot be done alone. Experience tell us that when a child enrolls in Head Start, the whole family can quickly become involved. That’s what happened to Kimberly Krause of Buffalo, Minnesota.

Although, not a Head Start alumni herself, she found herself a recently divorced mom with 4 children (6 1/2, 5 and twin 3 year olds). She enrolled her twins in a local Head Start program.

“When the teachers showed up to complete the paperwork they encouraged me to apply for the bus driver/classroom aide position. I did and within 10 years had worked my way to the center supervisor. At that point, I enrolled in college and spent 7 years earning a BS in Early Childhood Development.

“I have raised my children and they have become inspired to also attend college, the oldest is in med school and one of my girls is nearing graduation as a medical assistant and hopes to go on to become an RN. I have gone back to A Head Start program not because I can make a living wage but because I believe that the children deserve an opportunity to achieve all they can be and more!”

What is really compelling is how parent involvement, encouragement, and a team atmosphere can make a difference in how parents give back to Head Start to continue the program. How many of you know of stories just like this — or this is similar to your story?

It is really no secret at all that parent involvement is a key to the continued success of Head Start. There are:

So, it only makes sense that the revised Performance Standards released by the U.S. Department of Health and Human Services also incorporates a renewed emphasis on family engagement.

As the only federal program that empowers parents with rights, roles and responsibilities, we know the involvement of parents adds to the strength of the program, families and communities.

What we know is parents, both mothers and fathers, are empowered to be part of Head Start as volunteers and staff members. We know there are benefits children experience because of their parents’ involvement and that it makes a lasting impression in their lives.

Consider Lily Irvin-Vitela, Executive Director of the Supporting Families Together Association in Madison, Wisconsin. Lily Irvin-Vitela remembers when the program moved into a new Head Start space behind the local church.

“I remember how parents and children worked together to get the playground ready by raking, painting equipment, and pulling weeds. It sent a message that Head Start was our place and we were all in it together.

“I remember my Mom and Dad volunteering and how proud I was of them when they came to visit my sister and I at school.

“At Head Start, I was told by my teachers, that I mattered and I believed them. I was taught that my parents, community, and friends mattered. I believe that too. “

Even this early in life, the Executive Director of the Supporting Families Together Association remembers feeling a sense of community helping her parents and others to prepare the new Head Start space, coming together to send “a message that Head Start was our place.”

That sense of community and pride also included seeing her parents volunteer in her Head Start classroom. There is no other federal program that outlines roles and responsibilities for parents like this one. Simply put, Head Start is not just a place for children, importantly, there’s also a place for parents.

Parents play a vital role in Head Start. But there is still room for improvement in incorporating parents into our programs. They are a part of our team that must be included at every level.

Urie Bronfenbrenner, co-founder of the Head Start program, claimed early on that his vision for parental involvement in Head Start was “having parents become ‘captivated’ by their own children, supportive of their education, and irrationally committed to the idea that their children mattered.”

Consider that in December, parents from around the country will be attending the 29th Annual Head Start Parent Conference and Family Engagement Institute in Dallas, Texas. In addition to training seminars, parents will engage in discussions about:

During one of the opening sessions eight families from across the country will be highlighted as part of the 27 Million Windows initiative. They will share how their family was touched by Head Start and you can bet that parents will be a major part of that session.

As we finish our series on The Secret to Head Start Success, I’d like to leave you with a few questions about Parent Involvement and Family Engagement.

I’d love to hear your comments below.